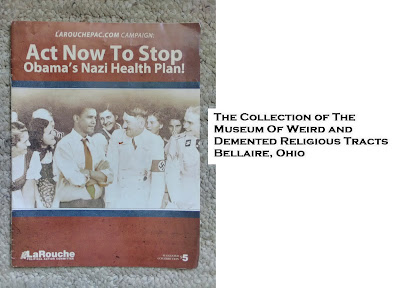 This isn't a religious tract; the Lyndon LaRouche movement is a secular political cult but it contains elements of a quasi-religion. Lyndon LaRouche (1922-2019) was a Marxist-turned-reactionary who became best known as a perennial presidential candidate. This 16-page magazine from 2009 has an inflammatory message about then-President Obama's plans for national health care.

I received this tract from a Larouche zombie outide Sean Hannity's August 2009 Freedom Concert in San Diego. At the concert, I was seated directed behind Hannity's wife and kids. It was a surreal event.

I always enjoyed mocking Larouchies when I was an employee at USC and they would set up tables on the sidewalks adjacent to campus. LaRouchies swear to a vow of chastity so they were notoriously humorless when I mocked them. Typical condescending remark made to a LaRouchie: "Do your parents know you're doing this?"

The Museum of Weird and Demented Religious Tracts is a project of Les Zazous Postmodern Art Galley of Bellaire, Ohio. Read the Welcome Statement of The Museum here.

The index of tracts for the museum's website is here.

Troy Davis writes: Jack Chick (1924-2016) embraced and stood by some pretty sketchy characters such as John Todd and Alberto Rivera, but Dr... 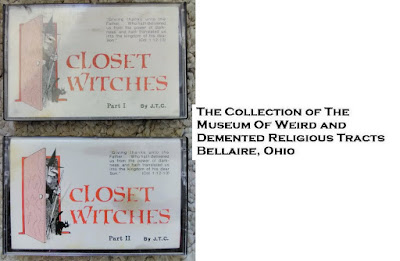 The Museum is housed in The Les Zazous Postmodern Art Gallery of Bellaire, Ohio